With Beyblade, spinning tops are in the spotlight. Takao Aki's manga, transformed into an anime series, was released between 1999 and 2004, first in comic book form, before invading our television screens.

The cartoon ran between 2001 and 2003. In the first season, called Beyblade, Ryuga, Doji and Kyoya compete in a spinning tops tournament find out who is the most talented. Two more seasons followed: Beyblade 6-Force and Beyblade G-Revolution.

Beyblade is only the first in the saga, which was followed by two more: Beyblade Metal and Beyblade Burst. The Beyblade universe revolves around spinning tops and competitions held using them. Some tops are nice, like Storm Aquario, or nasty, like Dark Gasher and Dark Wolf.

The most ardent Beyblade fans are boys who love competitions and cartoons. Our clothing line, which featured various Beyblade motifs and designs, is made for boys of all ages. We can supply trousers, shorts, t-shirts, sweaters, and even accessories including diverse socks.

All are available on our site, from which interested retailers, merchants and stores can order with confidence.

Buying from us means getting low manufacturer prices at the same time as superior quality. The Beyblade license is one of the best in the world of boys' clothing. Increase your sales and attract more customers now! 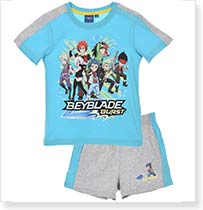 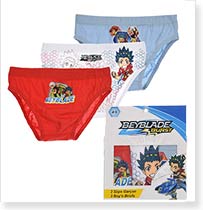 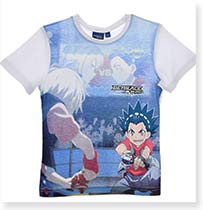